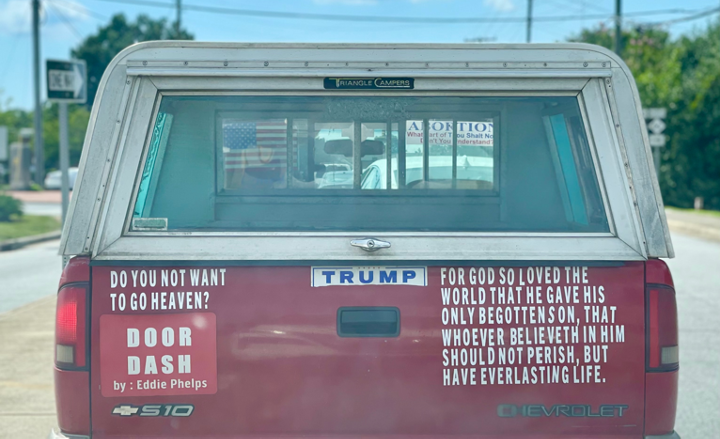 Ten years ago my young transgender son gave me the chance to see the world through his eyes. It began on Easter Sunday as we were struggling to get the kids dressed and out the door. I was raised Catholic, but through the years attended churches from different denominations — ones that prioritized inclusivity, fellowship, and service to others.

On that particular Sunday my family was headed to the First Congregational Church of Ann Arbor. The Congregational Church is known for being one of the few Christian denominations to oppose slavery and continues to challenge unsubstantiated and unjust church doctrine to this day. They affirm the LGBTQ community and do not condemn them as abominations to God — in contrast to the dangerous rhetoric promoted by some evangelical and Catholic churches.

My son was distraught before socially transitioning but has thrived in the years since we affirmed his gender identity. Fortunately, medical professionals diagnosed his gender dysphoria and provided the proper health care as he got older. That’s now in jeopardy.

A bill recently introduced in Michigan — similar to laws already passed in Texas and Alabama  — would classify me as a child abuser with a potential sentence of life in prison. What is my crime? I enable my 14-year-old transgender son to follow the medical recommendations of pediatric endocrinologists.

I haven’t had to seriously consider going to prison before, but it is nothing compared to what will happen to trans kids under these laws. My son and thousands of children like him will be denied gender-affirming health care and taken away from their families. For a population that already sees high rates of attempted suicide, this threat can have deadly consequences.

Make no mistake, kids will die because of this legislation.

How did we get here? Our country has allowed “sincerely held religious beliefs” to carry the same credibility as evidence-based facts. This paved the way for a rise in Christian nationalism that threatens the civil rights of Lesbian, Gay, Bisexual, Transgender, and Queer people and stands at odds with America’s representative democracy.

To prevent the weaponization of religion against the LGBTQ community as well as other marginalized groups, we must approach social justice work from an agnostic position of acknowledging our objective uncertainty about God. We need to reinforce safeguards around the separation of church and state and ensure equal protection under the law for all people, regardless of their affiliation with a favored religious group.

When my child’s life is on the line, I will take any amount of evidence over a strongly held belief in the supernatural.

Democracy Depends on Saying ‘Faith is Not Fact’

My intent is not to disprove religious beliefs. Acknowledging that faith is not fact simply recognizes no one can objectively prove the fundamental tenets of religious doctrine or supernatural beliefs.

Unfortunately, many religions misrepresent their doctrine as indisputable, with no distinction between subjective and objective truth. This misrepresentation has fueled the rise of Christian nationalism, a religious political movement that believes the government should enforce traditional Christian values. Ultimately, Christian nationalists lead Christians to believe they have a biblical mandate to claim control of government, education, media, arts and entertainment, religion, family, and business.

This ideology is fundamentally at odds with a government that reflects the will of the people as a whole. A central tenet of American democracy is religious freedom that does not privilege one belief system over others. As Amanda Tylor, executive director of the Baptist Joint Committee for Religious Liberty, warns us, Christian nationalism is the “single biggest threat to religious liberty.”

How did we get to this point?

Faith, which can be such a powerful force for good, is susceptible to egregious abuse and manipulation. Through the centuries, religious exploitation proved such an effective way to exert control over a populace that it became the ultimate weapon. Doctrine has been used to justify genocide, slavery, forced conversion, white supremacy, and the suppression of women’s rights.

Today, radical conservatives embrace Christian nationalism to their great advantage, recognizing the power that comes with controlling the religious narrative. They seem to have perfected the weaponization of religion.

In some Christian denominations, children are taught from a young age that church doctrine is unquestionably true. Church and family are woven together to form the social fabric of their lives. Whether it’s intended or not, this is indoctrination — the antithesis of critical thinking. It is no wonder many raised in this environment are so susceptible to manipulation by church leaders and radical conservatives.

Take a Stand Against Weaponized Religion

The danger of accepting religious beliefs as objective truth is painfully illustrated in anti-trans legislation. For years, experts have debunked every argument made by anti-trans conservatives with peer-reviewed longitudinal studies and testimony from every credible medical and mental health organization.

This approach has not stopped anti-trans legislation. Our nation’s history is replete with similar unsuccessful challenges to injustices inflicted by those interpreting our constitution through the lens of Christianity. As bad as it seems now, it’s about to get worse.

As Katherine Stewart reveals in her in-depth investigation of the Christian nationalist movement, the assault on individual liberties will not stop with the overturning of Roe v. Wade. Christian nationalist legislators and judges have already opened the gate to theocracy by ruling in favor of those who dehumanize and discriminate in the name of religious freedom.

Hundreds of pieces of legislation moving through state houses effectively deny the existence of LGBTQ students, criminalize mention of their existence by educators, and ban school materials that affirm their humanity. None is more destructive than the legislation signed by Florida Gov. Ron DeSantis — a law U.S. Congresswoman Marjorie Taylor Greene is working to replicate at the federal level. By framing hot button issues as a choice between God and evil, radical conservatives prey on the emotions of voters told to place faith above all else.

So how do we stop it?

The 2024 elections will be pivotal in determining whether our country takes action to shore up the core tenets of our democracy and guarantee civil rights for all people. We need organized opposition to state-level anti-LGBTQ legislation, and we need to support candidates who lobby for legal protections for LGBTQ people and promote the separation of church and state. Join the movement to declare faith is not fact as an essential step to ending the weaponization of religion and achieving lasting progress toward social justice.

Peter Tchoryk is the father of a transgender child, LGBTQ rights advocate, engineer, and founder of Faith is Not Fact / Free Thinkers for Equality, a movement to prevent discrimination on the basis of religious beliefs that contradict evidence-based facts, especially related to LGBTQ rights.